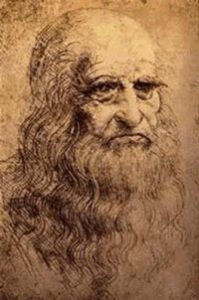 It’s easy for anyone to run out of superlatives when attempting to adequately describe the life and achievements of Leonardo da Vinci. Born in 1452, almost 500 years after his death, the Italian-born thinker is still regarded by many scholars as the ultimate Renaissance man.

Leonardo da Vinci, in the opinion of many scholars, is the one individual who most completely epitomized the intellectual curiosity, technological innovation, thirst for perfection, and humanist ideals of the late Renaissance movement.

Succinctly speaking, Leonardo da Vinci is remembered as one of the greatest painters, and greatest geniuses, the world has ever known. Over the course of his lifetime he was a painter, sculptor, architect, musician, scientist, mathematician, engineer, inventor, anatomist, geologist, cartographer, botanist, and writer.

Leonardo was a master at whatever he chose to apply himself. His artwork, historians have observed, bears an uncanny ability to blend the artistic with the scientific. Even in his unfinished projects and drawings, nothing seems incongruous or out of place. Technical perfection, sometimes centuries ahead of its time, seamlessly melded with aesthetic beauty was an achievement that just came naturally to Leonardo.

Leonardo da Vinci’s father was a local notary in the small town of Vinci, near Florence. Piero da Vinci married four times, yet young Leonardo’s childhood was otherwise unremarkable until, as a teenager, his father apprenticed the boy to the noted Florentine painter and sculptor Verrocchio.

Other prominent artists of the day associated at Verocchio’s studio, and young Leonardo da Vinci soon proved to be a quick study, learning the latest methods and theories on painting and sculpting with ease. Verrocchio and his star pupil, Leonardo, worked closely during those years in Florence, which was generally accepted as the cradle of the Renaissance.

In fact, such was Leonardo da Vinci’s talent that he soon found himself improving on the very best techniques of his time, growing beyond his peers and even his teacher.

A famous story relates that, while still an apprentice, Leonardo da Vinci showed Verrocchio a painting he had just finished (it was Leonardo’s job to fill in backgrounds and other details of paintings by Verrocchio). The great Verrocchio, a master in his own right, was so stunned by his student’s talent that he put down his brush and vowed never to paint again. So far as historians can tell, Verrocchio never did.

By the time he was twenty, Leonardo da Vinci was already accredited as a master in the prestigious Florentine guild of artists and doctors of medicine, and he never looked back. Spending most of his life working in Milan, Florence, and Venice, Leonardo cultivated a small but loyal following of devoted students and awed patrons, such as the famous Medici family that ruled much of northern Italy at the time.

Leonardo da Vinci’s talent and vision were so great that his clients never seemed to mind waiting years for a finished product. Leonardo was also an undisputed perfectionist who insisted on testing experimental methods while he worked, greatly increasing the timetables for completing many projects.

During his most productive years, he conceptualized such far-reaching inventions as a working helicopter, the airplane, the modern tank, countless engineering improvements, hydraulic power, a workable theory for the internal combustion engine and the basics of continental drift.

During this same time, he was also one of the world’s greatest painters and artists, even lending his advice and influencing fellow Renaissance stars such as Michelangelo and Raphael. His technical drawings of human anatomy were so accurate they were still being copied in medical textbooks into the twentieth century.

In his later years, when much of northern Italy came under French occupation, Leonardo was regarded as a kind of living national treasure. Charles d’Amboise, the French governor of Milan in those years, immediately befriended Leonardo upon his arrival to Milan in 1506 and became his patron.

In 1508 Leonardo da Vinci completed the recently rediscovered “Horse and Rider”, a small study done in beeswax. Most likely, the model was for a never-completed life-sized bronze statue of Charles d’Amboise on horseback. The re-emergence of a mold derived from this exceptionally rare Leonardo work has excited the artistic community.

When Leonardo da Vinci died in 1519 in southern France, he was living as a permanent guest of King Francois I of France, who was among his many admirers. The unparalleled genius died peacefully at age 67.