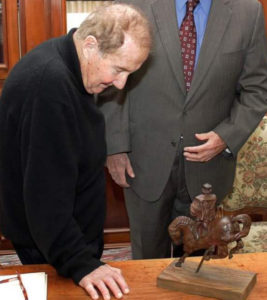 Carlo Pedretti was Professor Emeritus of Italian Art History at the University of California, Los Angeles, where he also held the Armand Hammer Chair in Leonardo Studies. In 2013 he moved permanently to Italy to live in the Villa di Castel Vitoni in Lamporecchio, headquarters of The Rossana and Carlo Foundation, which he directed up until his death.

He published sixty books and more than five-hundred essays, articles, and exhibition catalogs in various languages on the many aspects of his specialization. He was a member of the Permanent Commission for the National Edition of Manuscripts and Drawings by Leonardo da Vinci. The honors received in Italy and abroad include the Gold Medal for Culture conferred by the President of the Italian Republic in 1972, and in the same year the Congressional Citation, the highest recognition from the government of the United States of America. He is also Honorary Citizen of the cities of Arezzo (2002); Vinci (2008); Romorantin, France (2010); Florence (2010); Lamporecchio (2011); and Pennabilli (2015). He holds the title of doctor honoris causa from three Italian universities, Ferrara (1992), Urbino (1998), and Milan (Cattolica, 1999), as well as one from the University of Caen, France (2003).

Professor Pedretti’s contribution to the knowledge of Leonardo’s manuscripts and drawings has capital importance. His direct study of the originals enabled him to carry out the lifelong task of reassembling Leonardo’s papers according to their original and chronological order. Hence, his pioneering and prophetic work was the catalogue of 1957 of the fragments of Leonardo drawings at Windsor from the Codex Atlanticus at the Biblioteca Ambrosiana in Milan. The outcome of this approach is the monumental edition of Leonardo drawings at Windsor (1968–69), followed by the edition of drawings by Leonardo and his circle in Florence (1985), in Turin (l990), and in the American collections (1993). His critical and facsimile editions of Leonardo’s texts include the Codex Hammer (1987), the Book on Painting (1995), and also the Codex Arundel (1998). Journalism, the activity that began Pedretti’s career over fifty years ago (he was a regular contributor to the Corriere della Sera, the major Italian newspaper, and L’Osservatore Romano, the prestigious Vatican newspaper), led him to involvement in television and cinema as author, actor, and consultant to producers and directors. He loved to remember his collaboration with his friend Piero Angela for the production of a series of episodes dedicated to Leonardo for the Superquarck broadcast. He was an honorary member of the Accademia degli Euteleti in San Miniato al Tedesco and of the Accademia Raffaello in Urbino. Recently, he was nominated honorary member of the Accademia Nazionale di Scienze Lettere ed Arti in Modena.

Professor Pedretti is today regarded as the world’s leading authority on Leonardo da Vinci. He is especially known as an expert on artwork by Leonardo and is often asked to authenticate disputed pieces – those alleged to have been created by Leonardo – whenever they appear.

In 1985 he autheticated as by Leonardo, a wax model (c.1506-08) of a bucking horse with rider. The rider is an equestrian portrait of Charles d’Amboise, the French Governor of Milan from 1503-1511, Leonardo’s friend and patron. The wax statuette, including B&W photographs, were first published as a work by Leonardo in 1987, in “Leonardo da Vinci-In The Collection of Her Majesty the Queen At Windsor Castle” a special project entrusted to Carlo Pedretti.

Most recently, Professor Pedretti joined an international effort based in Italy to re-discover Leonardo’s famed fresco, “The Battle of Anghiari”, which the master spent two years painting in the early 1500s.

Carlo Pedretti’s publications are collected and commented upon in the following books:

Ludmer, Joyce Pellerano. Carlo Pedretti: A Bibliography of his Work on Leonardo da Vinci and the Renaissance [1944-1984]. Berkeley: Regents of the University of California and The Elmer Belt Library of Vinciana, 1987. Foreword by Kenneth Clark.